Ranting Joel is On the Loose!

Okay, This is going to be a philosophical and political rant. So those of you who are bored by such things, please feel free to click down. I won’t be offended.

I just read another earnest gun writer, telling me all about my “second amendment rights.” I hate that. It makes me angry. I know I’m being touchy on this point, but NOBODY GIVES ME MY RIGHTS. Not even dead white guys in wigs.

It’s not about the second amendment. That’s the first thing that stops me from reading further in 90% of the pro-gunowner articles I ever read. The writer insists that we have the right to keep and bear arms because the second amendment gives it to us, or (if he’s a little more on the ball) at least confirms the constitutional right.

It’s about being a mature creature.

Every mature creature on earth carries its means of self-defense with it at all times. Some are only weapons in the final crisis, or if an attacker more-or-less commits suicide as with a porcupine or a stonefish. But no matter how inoffensive the creature, it has some means of defense. It may not work, but it’s by god there.

A bunch of TUAK readers have dogs. Dogs can be the goofiest, friendliest critters on the planet. But from mastiffs to chihuahuas, they’ve got teeth in those bonecracker jaws and if you push them far enough they’ll be happy to demonstrate.

It’s a little-known fact that most cats are natural-born long range snipers, and many have achieved high levels of expertise.

Seriously, have you ever been bitten by a cat for real? I lost the use of my left thumb for almost three months, and you better believe I let him go right away ’cause it was the only way to get him to.

Even rabbits have teeth, and will cheerfully bite you with them. That’s not counting the claws at the end of those piledriver rear legs. Of course they’d much rather run away, but…

Not all these defenses really do much good. A mouse will sometimes attack a stalking cat, but the cat’s still gonna eat the mouse. Still, there they are. It’s the one visible sign that tells an adult from an infant. Weapons.

Humans kinda got shortchanged in the natural weapon department. We have hands that can strongly grasp, but no claws to speak of. Our teeth and jaws are a joke. We can’t run worth a damn. Yet we’re at the very tippy-top of any food chain you care to mention, because we’ve got one enormous advantage. Some animals are tool-users, but only humans are tool-makers. 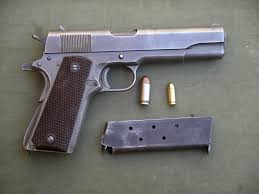 And by this we conquer.

Now, at the risk of being accused of speciesism, I really have no problem being a member of the baddest-assed species on the planet. But I’m not going to pretend I’m some ethereal, luminous creature, not akin to the beasts. Because what I am is a beast with a reasoning brain, a sense of history, and opposable thumbs. My ability to make and use tools is meant to be a weapon, and I’m not going to pretend it isn’t. That doesn’t make me dangerous to my neighbors.

But that’s not good enough for some of our would-be rulers. They want us to put aside all that atavism, lay down our natural weapons and get with our inner wimp. 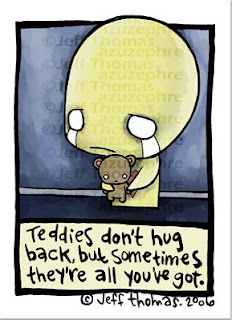 Once we have embraced the little guy and made him our own, we will be safe from all threats! For where there are no weapons, there can be no harm.

What’s that you say? Some might not want to go along with the program, and choose instead to harm our soft spongy flesh? Wherever shall we run, should we find ourselves in danger?

Why, to Mister Policeman, of course! You sillies!

No no, dears. He’s not saying that to you. That’s just for the bad men.

(AHEM) Back, political rant! Back! Into your cage, right now. Gooboy. Here’s a treat.

Filter out about 60% of what I just rattled off there, and you might be able to detect that I was trying to make a point about where our rights come from. We don’t get our basic, natural rights from some guys in tight pants back in the olden days. We don’t get them from the clowns in Washington, or state capitols, or even from Sarah Palin. We get them from our paid-up adult membership in the baddest-ass species on the planet. Nobody can give them to us.

And nobody can take them away. We can just forget where we mislaid them.

You shouldn't ask these questions of a paranoid recluse, you know.
View all posts by Joel →
This entry was posted in Uncategorized. Bookmark the permalink.

6 Responses to Ranting Joel is On the Loose!

To the stake with the heretic! Cancel reply